The Big Move- from Alabama to California

So in my last post our family was in a transition- putting homeschool on hold for a while  (I’ve deleted that post, by the way…)

Shortly after I wrote that post, my husband received a job offer that would require us to relocate to California.

So, four weeks later, here we are in Monterey- and after considering all of our educational options here, we decided to hop back in to the homeschooling mode.

Can you believe I said all of that so passe?  Really?


I think I just haven’t really had a chance to let this all marinate.  In four weeks we packed up our family and drove cross country, uprooted our lives to live in a place where we don’t know a soul.  We said goodbye to dear friends and family.
Whoa.

Still though, I guess it’s nice to be back in sunny Cali–-I lived here as a kid, spent a few, short years in Atwater with my parents.  I just never thought I’d be back to live, but anyway, here we are.

I still haven’t quite figured out how I’m going to mix that in with new business I just began, but I’m remaining positive that it will somehow work out.  My kids have had enough transition and change as it is, and putting them in to the local public school here wouldn’t be a BAD idea…just not the best for now.

I want the best for each season of their lives.  If there’s anything I’ve learned over the past few months, it’s how to be open to the different seasons in our lives as a family…and I don’t have to tie our family down to any one mode or the next.  To be open to God’s leading in our lives is important.   Being resistant to change means we’ll simply make a religion out of our mode of lives…but is that meaningful?  I think God is showing me how to transition easier, and be open to His guidance.

The drive here was a treat.

Arizona with its dry climate and cattle galore. 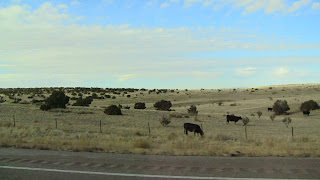 As soon as we hit New Mexico I knew were nearing the West Coast.  The mountainous region was dry with its infamous red adobe, rocky hills and gentle sunlight. 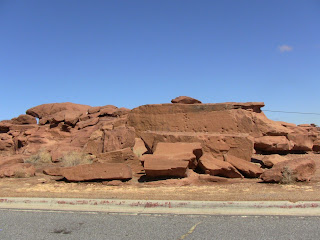 We were COLD, though…even though it looks sunny!

The winds were blowing some cold, gusty winds our way that day.  It was around 53 degrees…
We drove an hour or so longer and suddenly were in the snowy mountains of Arizona… 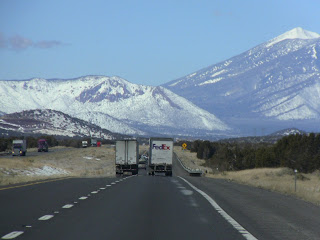 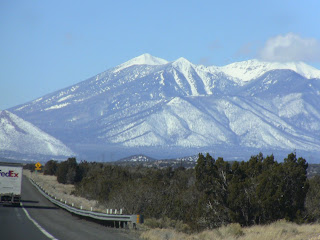 Closer to California my battery went dead on the camera and I wasn’t able to capture the beauty of freshly cut green grass on beautiful rolling hills, majestic mountains, free range cattle that somehow made it to the top of these high hills, and nearly perfectly aligned crops of every sort (strawberries, wheat, orange groves, vineyards) grown all over the earth of Cali.  I did manage to catch a few the second day after we arrived to Bakersfield.  Maybe 100 miles out we ended up in the middle of some breath-taking ranches, rolling hills, and small mountains covered in luscious, green grass. 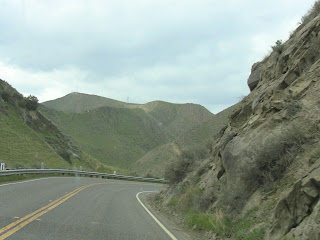 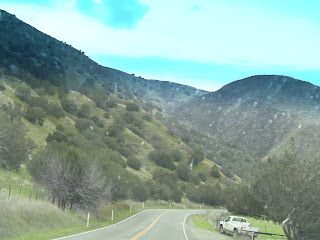 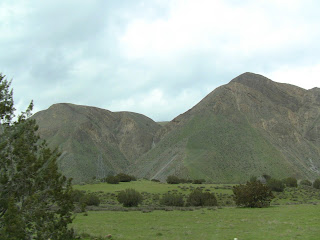 At times, the free range cows would come out to play.  It was a strange experience being so close to cows…but in a serene environment.  All natural.  I couldn’t catch a snapshot of the animals, though.  Ny may have captured some on her camera. 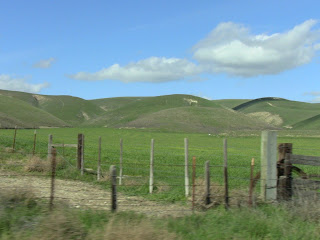 It’s amazing the startling difference in climate and landscape from one region of California to the next.   You can be in the snow capped moutains in skis and and snowsuit and minutes later be sunbathing out on the beach.  One minute we’re on a cattle ranch, the next we’re in a bustling city surrounded by palm trees. 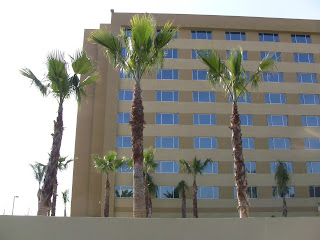 This was the biggest field trip of our lives.  Ny studied the maps the entire way and got pretty good at letting us know how many miles we were away from the next town or the nearest Sam’s Club (the $10 Sam’s Club Atlas was a lifesaver, by the way!)  We mapped out all of our gas stops and hotel stays before we set out and gas was definitely cheaper at Sam’s.  Once we arrive in California we made the mistake of stopping at a local gas station and paid about $4.30 a gallon for gas.

So, there you have it…most of our trip and highlights of some of our memories driving over.  Add in nightly Marriot stays (it pays to be a member if you travel a lot- you can redeem those points back for some cool rewards and we got continental breakfast and light dinners free each night), some Israel Houghton for background music effects, Veggie Tales DVD’s in the backseat, restroom stops every 3 hours and a cooler full of juices and snacks for the kids and that was pretty much our entire trip.  Oh, and throw in some extra doses of prayer, especially during those drives through the mountains.

I look forward to our new life here- to see what God has in store and to get plugged in to the community here.  In my next post, I’ll have some pics of the kids and what they’ve been up to.